I have a confession.

While some women will go in the middle of the night for a preggo food fit, I’ll drive hours away to score the perfect bowl of soup. And compound that with my pregnancy there’s nothing stopping a good soup stop. At my OB/GYNO, there was this little cafe called Alonti and they served the most amazing “Italian Wedding Soup.” While not a traditional recipe, but one with chicken, cream and wonderful goodness. So much so, that when I was pregnant with my second, it continued to be a part of my routine: first go to the appointment and then followup up with a big cup of the soup.

And then one day, I went and it was gone. Closed down. Finito. (Good for my waistline, bad for my craving.)

So I went to the internet to scour for the recipe, but I quickly discovered this was going to be like trying to find the formula for Coca-Cola. I did get close with the photo below from a blog called “Cookinginflipflops.com,” but unfortunately, the website doesn’t work anymore. I was able to find a photo and filed it on Pinterest in hopes to at least remember what it tasted like and maybe one day get a recipe.

Oh woe is me as tears of chicken broth come down my cheek. But then Pinterest came and brought me a kleenex and a recipe for it. While it was a close second, it still doesn’t cure the sickness that ailed me (but it’ll work in fix.)

While that soup will continue to be on my list of must-find must-haves, there’s another “Italian” soup that makes me happy, especially when it’s cold and gloomy (like the best day ever for soup): Olive Garden’s Zuppa Toscano. With the ideal combination of greens, italian sausage, cream and spiciness, this soup is what makes their soup and salad lunch the best deal ever (for me, not them.) Again, through the magic of Pinterest, I also found a recipe for this stuff. Can’t wait to make it soon to see how close it is.
Unfortunately, just because soup is liquid doesn’t always make it lowfat. (Have you checked out the fat count for the Tomato Basil Soup at La Madeleine?  – don’t.) However, there are some soups that can help you do exactly that – lose weight. Which is particularly good when you’ve been eating either of the soups I’ve covered, you’ll need something to help you knock off that extra few pounds you’ll gain after bowl #10.
And since it IS February, I’ve actually been divulging more HEALTHY soups.One of those you must look at is the Fat-Flush soup. It’s a whole diet plan, but even if you don’t care about the fat flush part, it is a great winter soup recipe!

And I don’t think talk about lowfat soups without including one of the biggest soup fads, the Cabbage Soup Diet. Again, I’m a little hesistant to eat anything consistently for 1 week, no matter how good it is. But you have to admit, it’s a keeper.

After making up gallons of soup like the Cabbage Soup, you’ll be eating on it for days. So I was uber excited to find the ideal accessory for a soup-obsessed fan like myself: The Lunch Pot by Black+Blum. 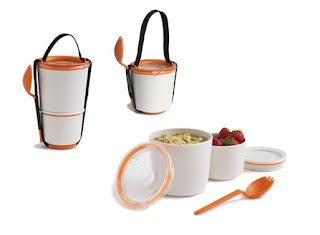 It’s multifunctional and travel-handy with two bowls that come adjoined with its own little spoon. Also, if you  just want to use one of the bowls, it can fit inside each other. It’s looks kinda like something IKEA would make and it sure is conveneient and works really well. And like all their stuff at Black & Blum, everything looks as though it belongs in an art gallery.

Of course, with all this talk about soup, I’d be remissed to not bring up my favorite spring event, Empty Bowls, a soup fundraiser in Dallas and Fort Worth for the local food banks. It’s a must go, so learn why here!

DISCLAIMER:I received one or more of the mentioned products for the sole purpose of this review. No other compensating was given and all opinions expressed are 100 percent my own. (Accordance with FTC’s 16 CFR Part 255, “Guides Concerning the Use of Endorsements and Testimonials in Advertising.”)