Whether you have an Anna, Elsa, Sven or Olaf, we have the coolest ideas for your Frozen Birthday Party.

“Let it Go” is always the theme for our birthday parties!

I love the whole production from concept to thank you notes and my son has now gotten in the act with me.

Last year was pretty hard to beat when two weeks after we returned from the most amazing trip to Disney World to hand deliver an invite, he “returned” to see us in Texas for a fun Mickey Mouse birthday experience where he joined in all the fun.

So when Jackson announced this year’s challenge was actually a Frozen-inspired boy party, I knew I had my work cut out for me. So we’re sharing our Frozen birthday party ideas here (and on a budget!)

My first plan of action included having snow at the front lawn and an appearance by Sven for a little reindeer petting opportunity. Unfortunately the $850 for the snow delivery to the house and $200/hr for the reindeer wasn’t in the budget. While a sad mama that I couldn’t make the coolest party ever happen, I still had hopes that we could create a little bit of Arendelle without breaking the bank!

While there so many cute Invites available for a Frozen birthday, I opted for using a free emailed invite that could also keep track of RSVPs. 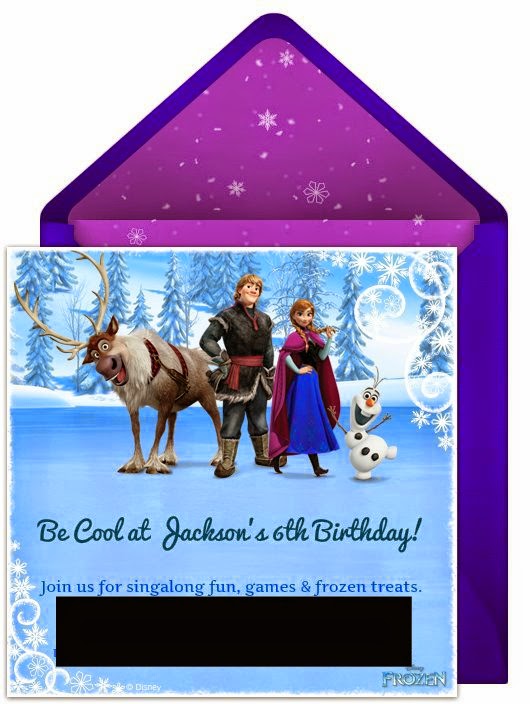 After the party, I quickly uploaded photos from my iPhone to my local photo shop and within a few hours a cute Thank You with photos from the party and used the back to have Jackson write his name.

We also blew up tons of white balloons to float on the ground to give the kids the illusion of snow. Also with a piece of blue material I was able to make it look like a lake in the middle of the concrete.

, tablecloths and napkins  as well as this cute Olaf the Snowman Balloon  (that I accidentally over aired and popped so that’s why he is on the wall!) Apparently you can’t get this Olaf balloon hardly anywhere so I highly suggest ordering it early!

For the feature part of our entertainment, we invited to Kona Ice to the party for a little snowcone fun for 30 minutes. The colorful van pulled up with a friendly driver and music, handed out shaved ice and then each of the kids could make their own flavor. The driver also let my kiddo jump in the truck to check things out and take a photo! It was super easy to book by just connecting on their website. 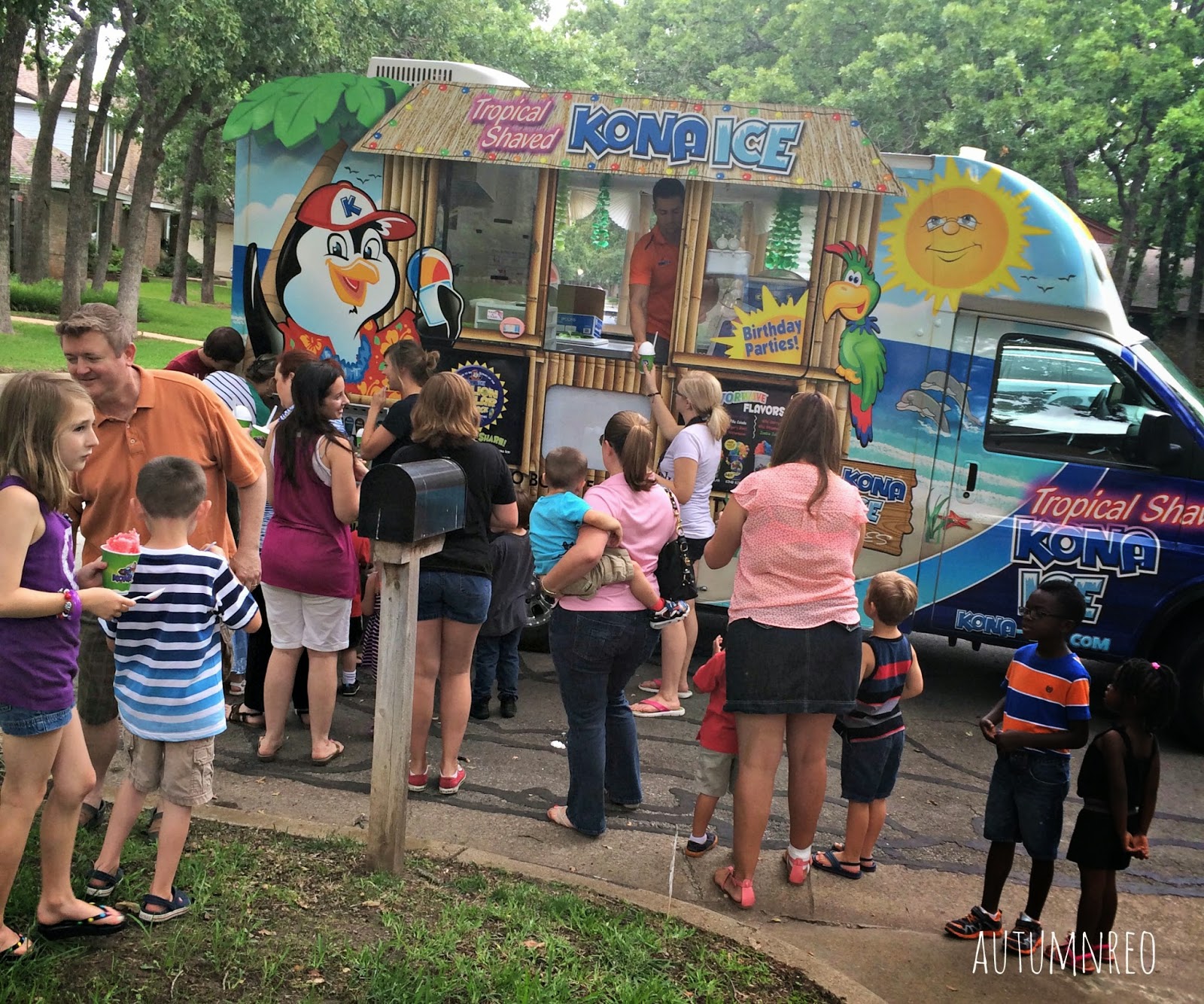 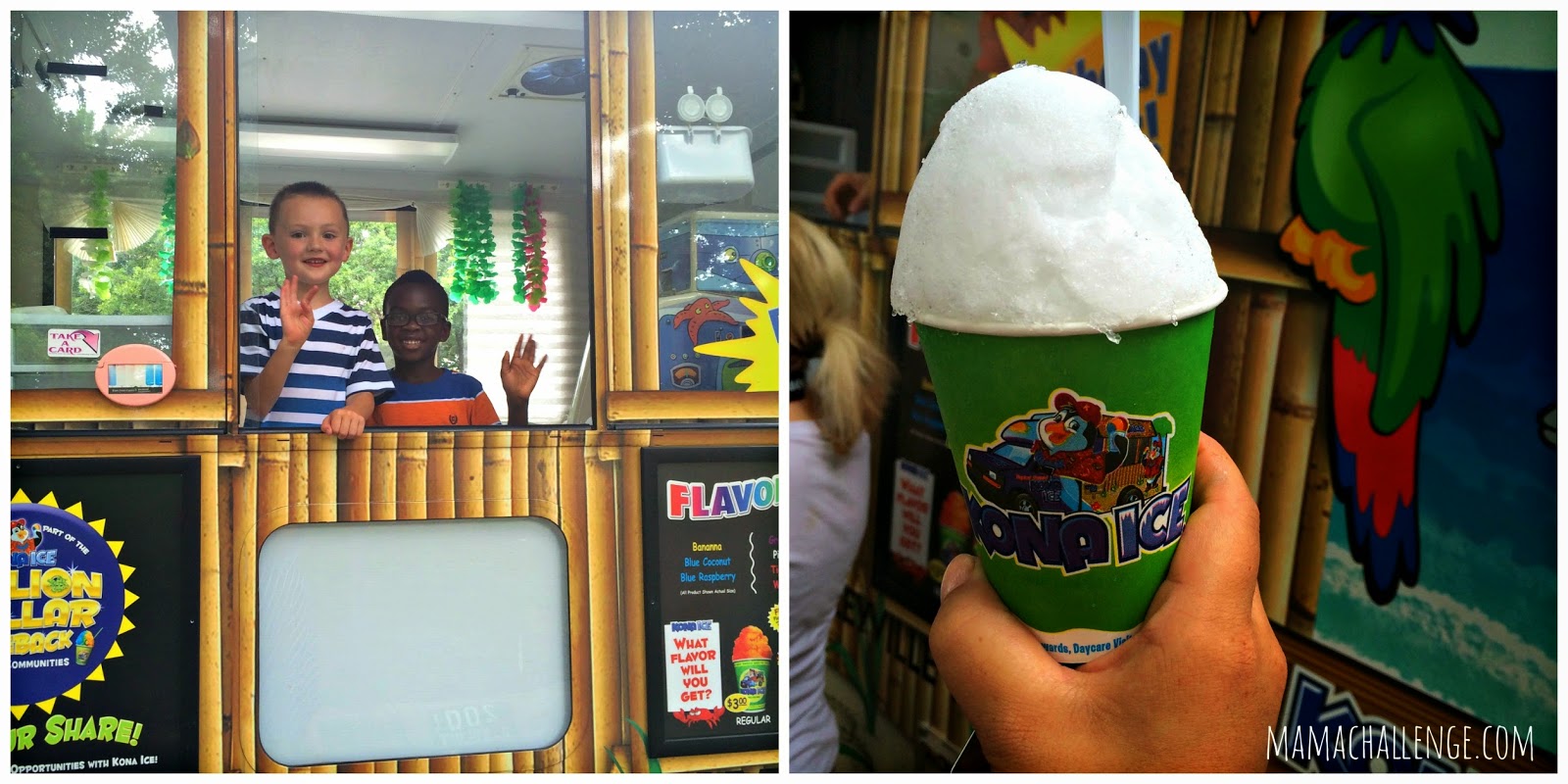 We also created stations for the kids to have fun before and after the snowcones.
Let it Snow:
Through lots of research, we found a great product called Insta-Snow that when added to water made eight gallons of snow. When the kids found out how much it felt like snow, they went crazy – including making snow angels. (The only warning I have to add is when too much water gets added, it gets very slick and messy, but they LOVED IT!)

Do You Want to Build a Snowman? Activity Table:
Using the fantastic download from HappyMoneySaver.com, I was able to print out these wonderful labels and bundle up our own activity packages.

Find Your Ice Treasure:
Probably one of the easiest activities ever, I purchased these inexpensive Frozen Cupcake Rings

and froze them in a round ice tray like this. During the party we placed them in the bowl and the kids were able to pick one, melt it in their hands and then get a ring! (Of course, there was lots of trading, so it was lots of fun!)

Cupcakes:
To make things easier for distribution, I always like using cupcakes! Since I didn’t want to use a premade cake at the store, I asked my neighborhood Tom Thumb to recreate and they did!

Other Snacks:
For other fare at the party, I decided to go light since it was a morning event and we already had snowcones for the entertainment. We made “ice” with sugar, used powered donut holes to be our “snowballs,” and these cute string cheese snowmen. 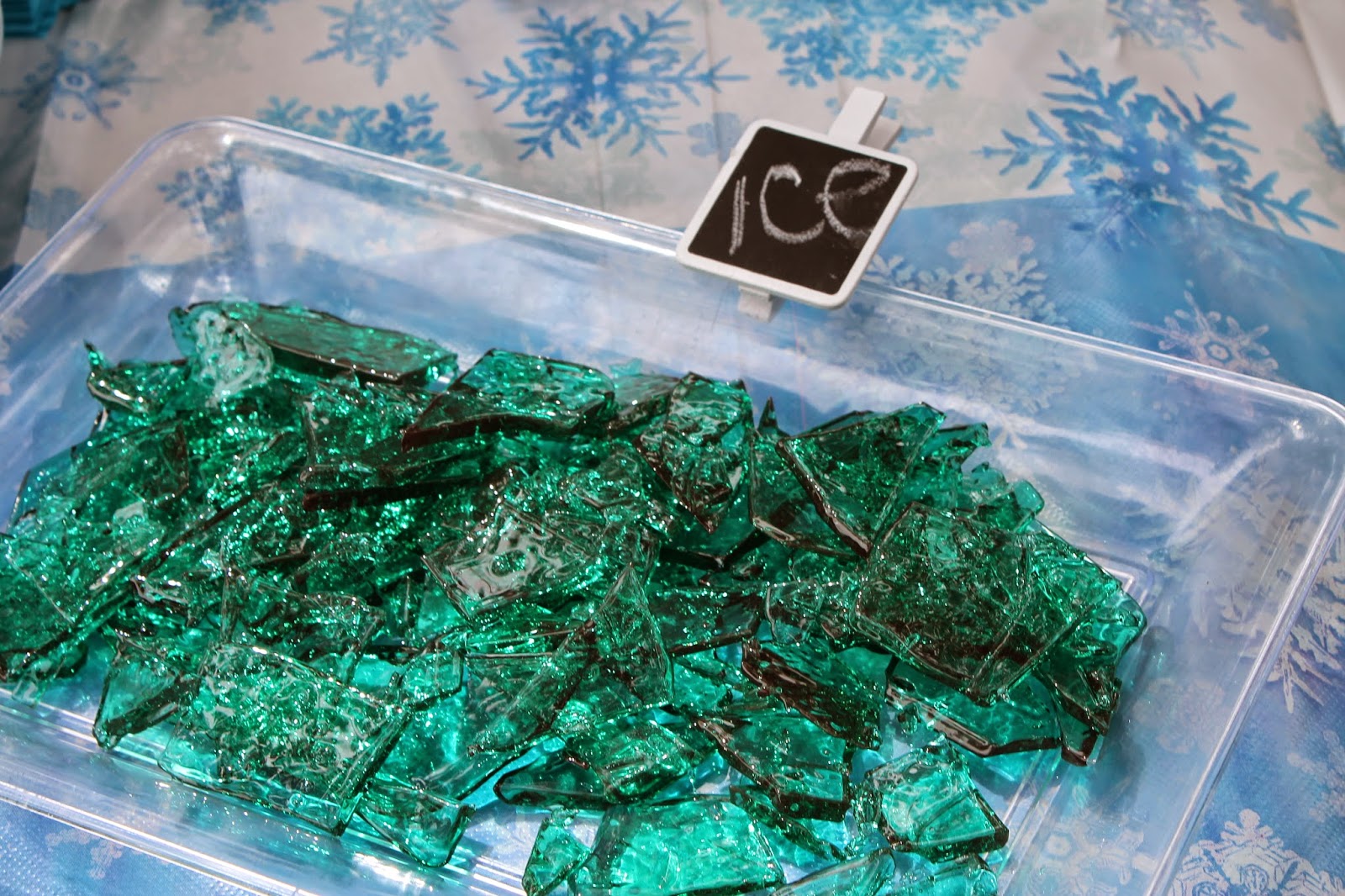 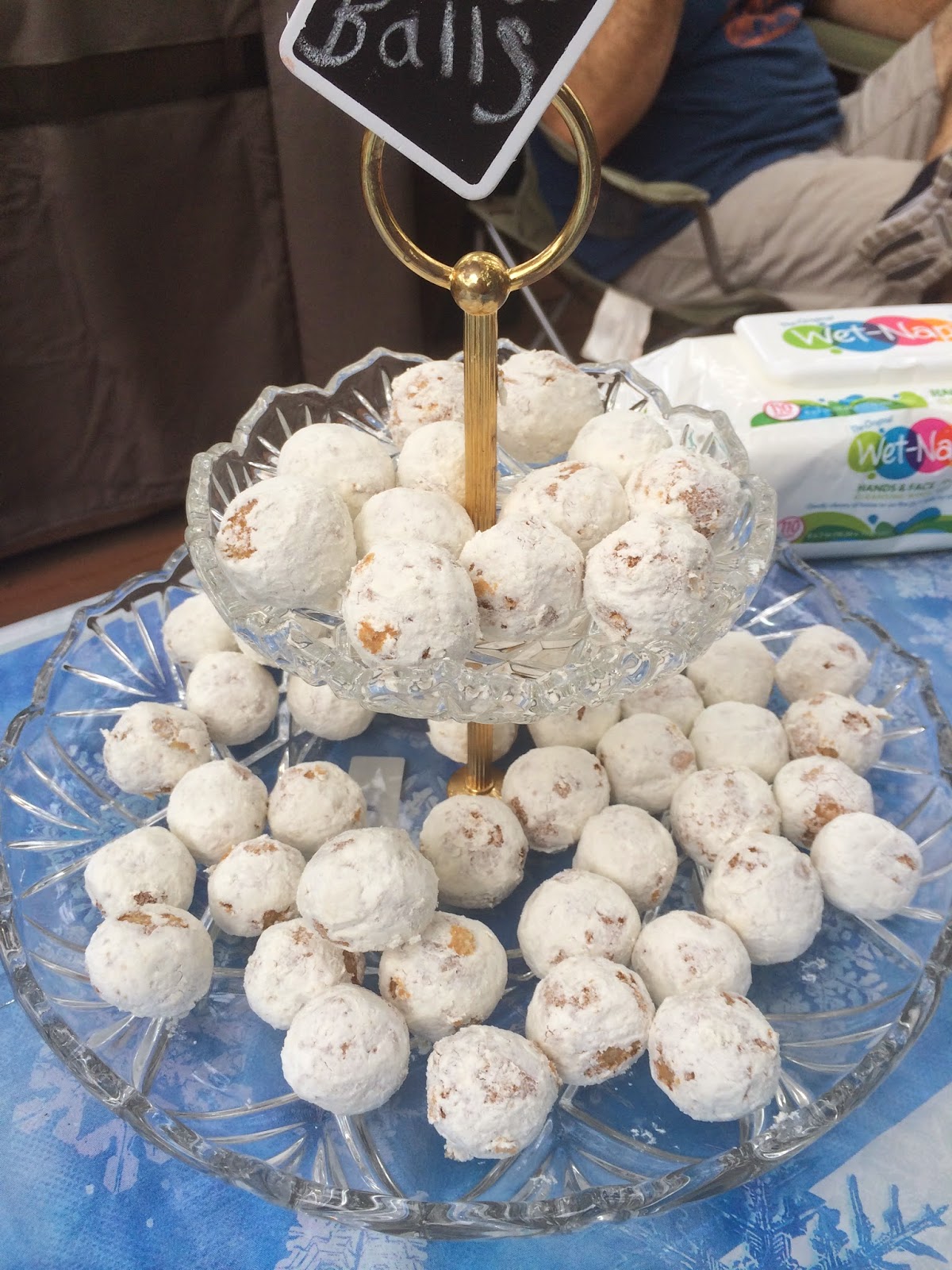 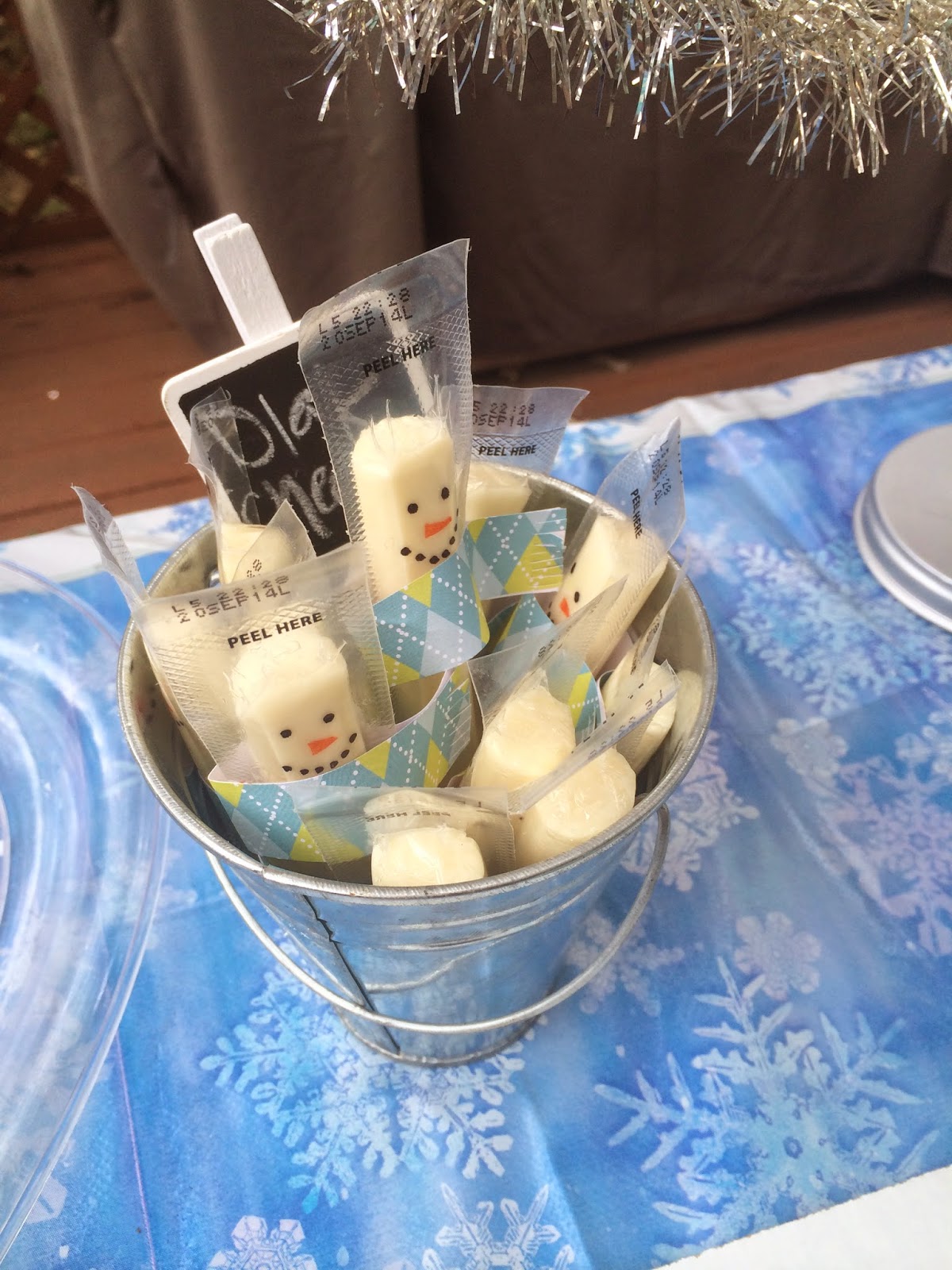 And for drink refreshments?
Sparkling Ice for the adults & Bottled water with “melted snow” labels laced with a little bit of spray snow for effect.
And let’s not forget the Wet Ones that were used to clean up all the mess from marshmallows, cupcakes, snowcones and of course, the snow!