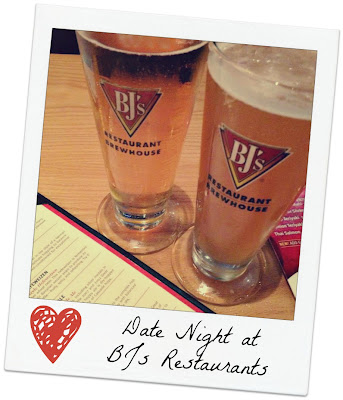 Something I’ve wanted for a long time and don’t get near enough of are meals with JUST the two of us. Between our busy schedules and two kids under 5, dinner is normally at home, in a rush and only about 15 minutes long or when the 18-month old rises from her seat and begins to touch her dirty hands all over the kitchen. So when we had the chance to score a DATE NIGHT with just the two of us at a local BJs Brewhouse in Arlington, I was thrilled (even if that meant “date night” was an early dinner before the kids got from school!) 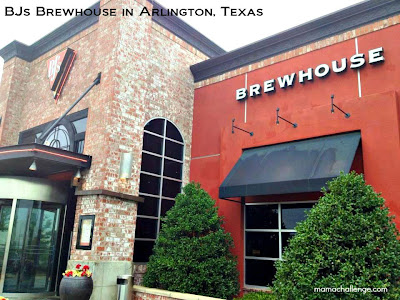 Since we felt like we were sneaking off during a school night, we wanted to go somewhere casual and could suit both of our taste AND our budget, so BJs was a great fit. We hadn’t been there in ages, so we figured it was time to try it out. We were greeted by a friendly staff and a warm atmosphere, helping us to relax and enjoy this special moment even if it was only going to be about an hour. After springing for two handcrafted beers (I couldn’t resist the sound of the Brewmaster’s Reserve Blonde Lager), we took on the huge menu to figure out “What’s for dinner?”

Being that we were on a “date,” we figured we’d go all out and try the Party for Two, an appropriate choice for this party of two – complete with two soups or salads, any medium signature pizza and a “pizookie.” Sounded like a plan that could make us both happy! 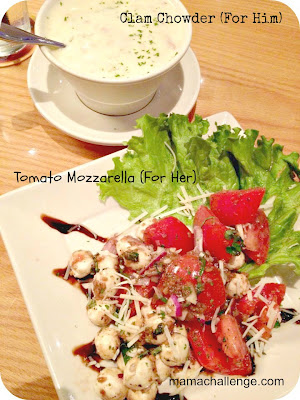 To start, my husband opted for Clam Chowder and I ordered the Tomato Mozarella Salad. Both were delicious and made me crave the next course even more. But we were going to have to agree on a pizza – at least we thought. While our helpful waiter let us know we could choose to order our pizza half and half, we both eyed one of the new flavors, the Spicy Meatball – complete with meatballs, jalapenos and Italian sausage. I knew he was really craving it, so I conceeded (or at least I let him think I took one for the team.) 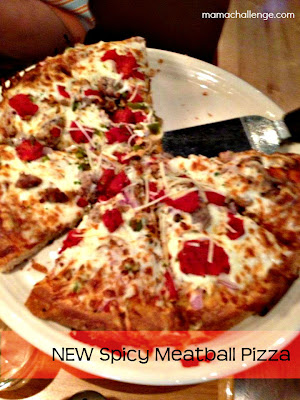 Mama Mia! The Spicy Meatball did not disapoint at all and I even ate one more slice them him. We would have eaten it all, but decided to box it up for later if there was anyway we were going to eat this PIZOOKIE thing. I had heard about it, but to be honest, it just seemed like a warm chocolate chip cookie and ice cream (a relatively normal desert), so why did people rave about it?
I was about to find out why.
There were actually like seven different Pizookies to choose from, but since this was our first one, we went for the original Bj’s Famous Pizookie. A few minutes later when it arrived at the table, we dove in like two kids on the playground. 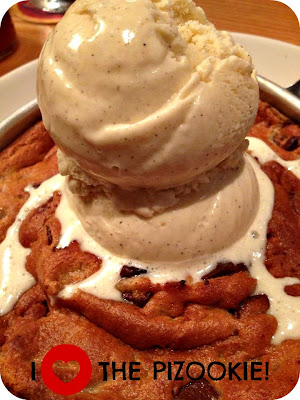 …And we finished that baby up in no time flat. It was honestly one of the best desserts I had devoured in a long time. It was just simple goodness without too much of the “other’ stuff. I mean when something is perfectly good, you don’t need anything else to make it better (although I will be back for the Pizookie Trio so I can decide that statement is true this time for myself!)
When the check came (after we let a button out on our pants), the look on my husband’s face was priceless. “Wow, did they forget something on here?”
Curious I took a look and everything we had ordered was there – it was just that for for the Party for Two and our two beers we had ordered (as well as the handcrafted rootbeer I had to take home), was just around $30. Now THAT is budget-friendly. And to think, if we hadn’t splurged for beers, we would have spent around $20 for a delicious three-course meal, great service and somewhere we look forward to frequenting again – soon.
Maybe this time we will bring the kids…maybe. 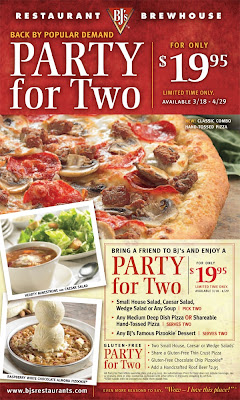 This shop is part of a social shopper marketing insight campaign with Pollinate Media Group™ and Bj’s Restaurants, but all my opinions are my own. #pmedia #Bjsrestaurants http://cmp.ly/3/8vNxcO.

Junk Food without the Junk: Healthy Versions of Junk Food